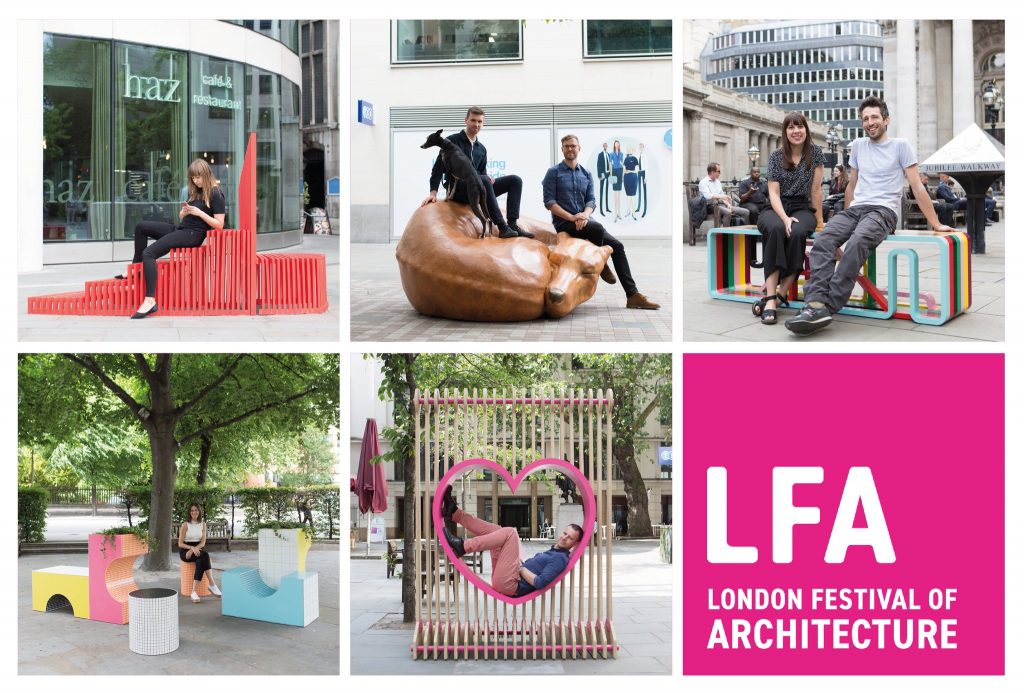 The first competition saw the LFA and the City of London Corporation collaborate in a call for designers to create ‘parklets’ – miniature landscaped spaces for City of London when the LFA returns to London’s streets in June 2019. Architects, designers and artists were invited to submit a design proposal for a parklet that will transform a kerbside area into a place to rest, relax and admire the City – bringing additional life and greenery to the City’s streets and public spaces during the world’s largest annual architecture festival.

Following on from the hugely popular series of benches installed across Cheapside and the City of London as part of the London Festival of Architecture 2018, the second competition saw the LFA collaborate with Cheapside Business Alliance to select five design teams to create a series of one-off public benches around the City of London. The project showcases emerging design talent and offer imaginative places for people to rest amidst the bustle of their city surroundings, while promoting the Cheapside district of the City of London as a great place to live, work and visit. Each team was selected for their ability to bring a fresh perspective on enlivening Cheapside’s urban environment, with a vision for public furniture fit for a festival.

Lunch Break installation is a result of the ‘St Paul’s Plinth’  design competition organised by the LFA, the City of London Corporation and Cheapside Business Alliance. Following the success of the St Paul’s Gateway installation designed by ScottWhitbyStudio and Arup in 2018 for a pedestrian island in front of the St Paul’s Tube station. The competition sought a site-specific intervention that would both resonate with the site’s historic heritage but also offer a glimpse into the future. The chosen design for the 2019 ‘St Paul’s Plinth’ competition comes from the creative architecture studio KHBT in collaboration with artist Ottmar Hörl and sees 35 gilded angels sitting on randomly arranged bars, suspended from the existing wire grid of the ‘St Paul’s Plinth’, which was first created by ScottWhitbyStudio and Arup in 2018.