The LFA in partnership with the City of London Corporation and the Illuminated River Foundation, has revealed the teams and designs shortlisted in a design competition to encourage greater public interaction with the River Thames. Subject to planning consent, the winning design will be enjoyed by a huge public audience when installed as part of the London Festival of Architecture and Illuminated River Project in June 2019.

As the LFA explores ‘boundaries’ as its theme in 2019, the call to architects, landscape architects, artists and designers offered an opportunity to address how the public can engage with the River Thames – seen by many as London’s biggest boundary. The project will also run alongside Fantastic Feats: The building of London(31 May – 1 December) – a cultural programme by the City Corporation in 2019 that celebrates London’s long-standing history of architectural and engineering firsts, and looks at how these innovations have contributed to improving the lives of Londoners over past centuries. The programme is inspired by a number of key historical dates including the 125thanniversary of Tower Bridge. 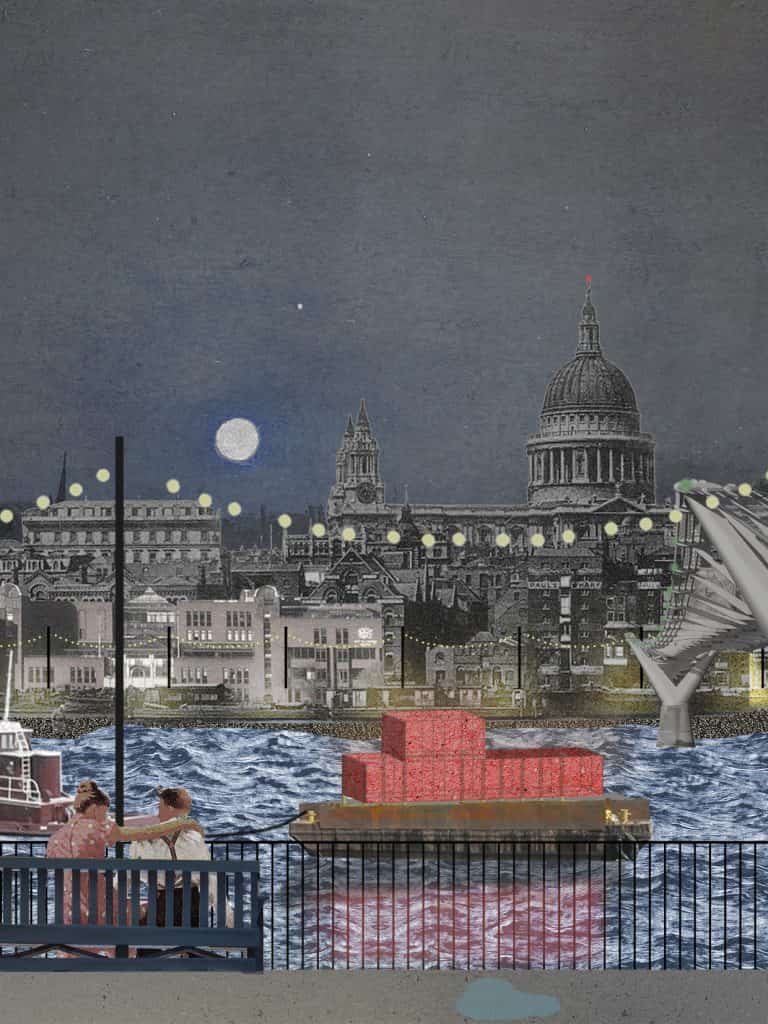 The Thames Water Gatetakes its cue from the ornate structures which lined the riverbank in the 17thcentury and provided access from the water to houses along The Strand and Fleet Street. The proposal consists of two parts: a pair of solid bases located within historically rich sites, and a lightweight illuminated ‘lantern’ that can be installed on top of both or upon a barge travelling between the two sites – celebrating the historic ceremonial and functional uses of the Thames and provoking a conversation about the role of the river within the city today. 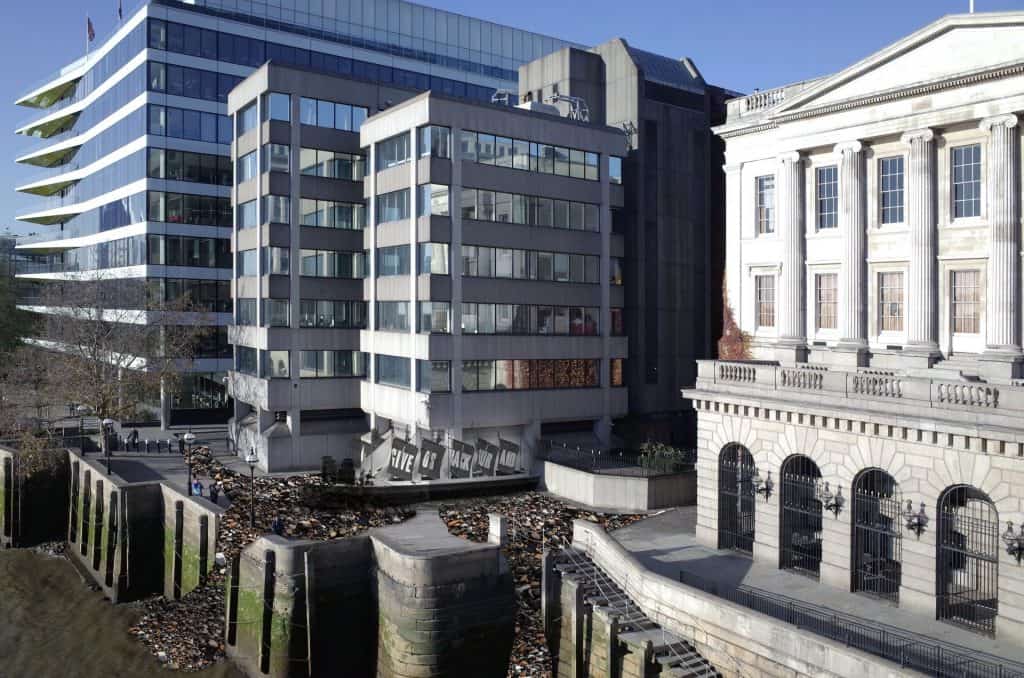 Concrete Action is a collective experimenting alternative spatial practices across the city, increasing transparency and empowering people who live in areas of intense urban renewal. Calling on digital commons, green junkie plants thriving on nitrogen dioxide, hybrid composite terrazzo directly cast from the beach and pipe dreams connecting it all, Samizdat on Thames tells a hidden story of activism, bringing people face to face with the dirty Thames, its forgotten pebble beach and the invisible liquid history of the people’s struggles, laundry money, river and land ownership. 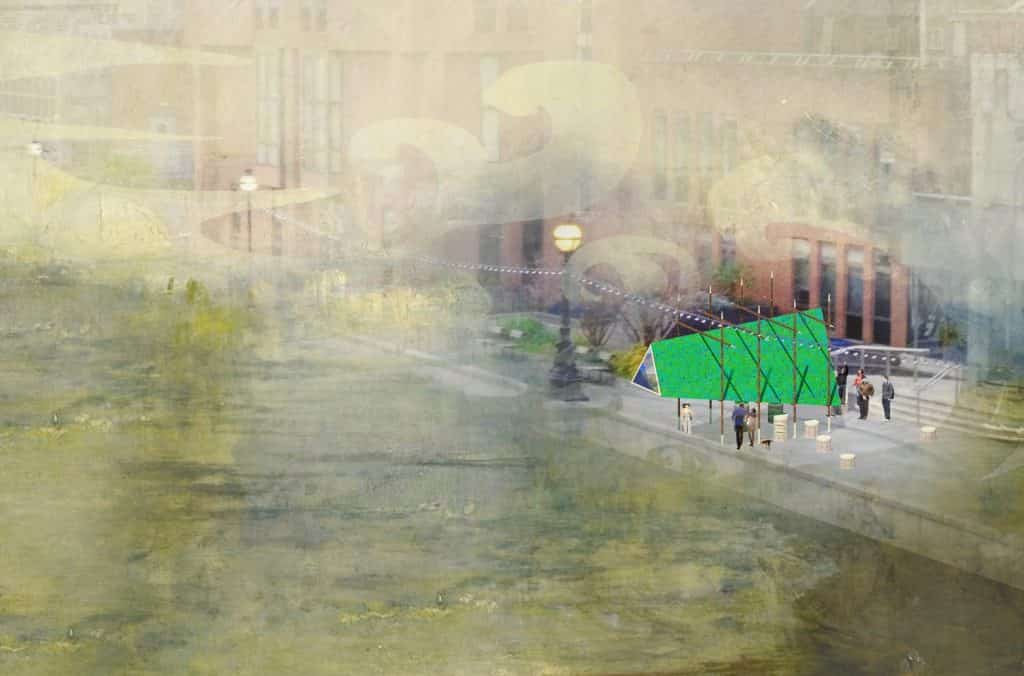 Kaleidoscope explores the strange and wild nature of the Thames at its urban boundaries in the city. Made entirely from waste products, the skin of the kaleidoscope is formed from recycled plastic sourced in London, and supported by timber thinnings (a forestry by-product). The structure captures the river’s wild atmosphere: daylight from the sky to the south, and refractions and reflections from its surface that change throughout the day whether through sunlight, mist, drizzle or fog. Inside, visitors sit amongst an array of multiplied and reconfigured elements. 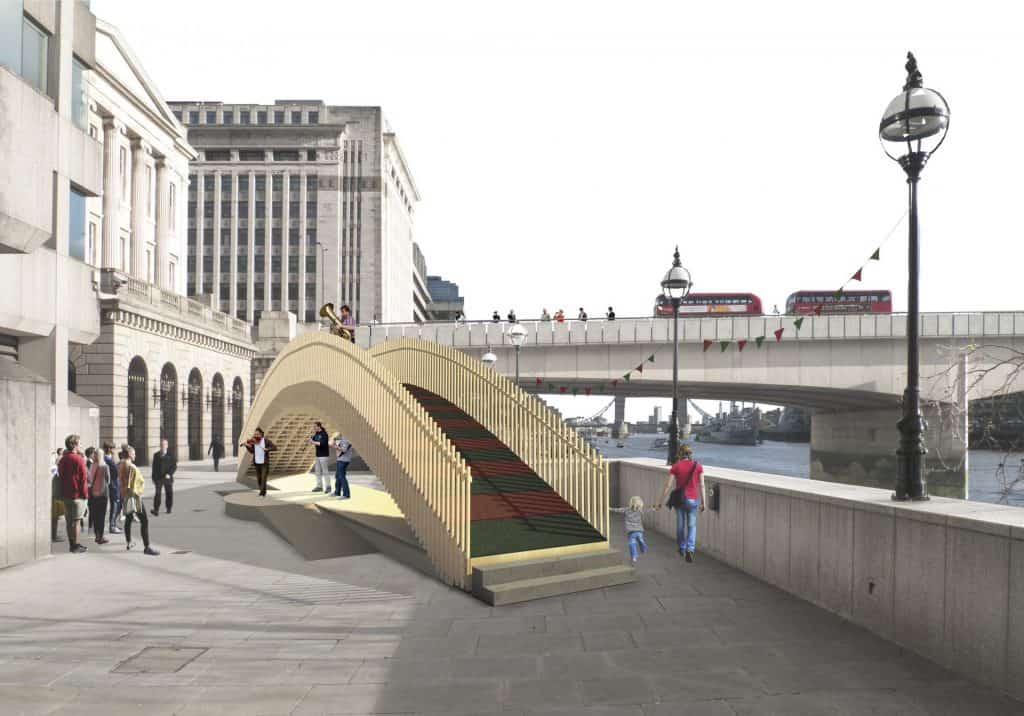 Four timber structures – The Stage, The Cabin, The Tunnel and The Bench– highlight the qualities of their riverside locations and enhance the river bank as a whole civic space. By adopting the structural principles of traditional Japanese timber bridges, each creates an intricate structure, with a simple and abstract form that can be enjoyed in its own right, or as part of a sequence along the north bank of the Thames. 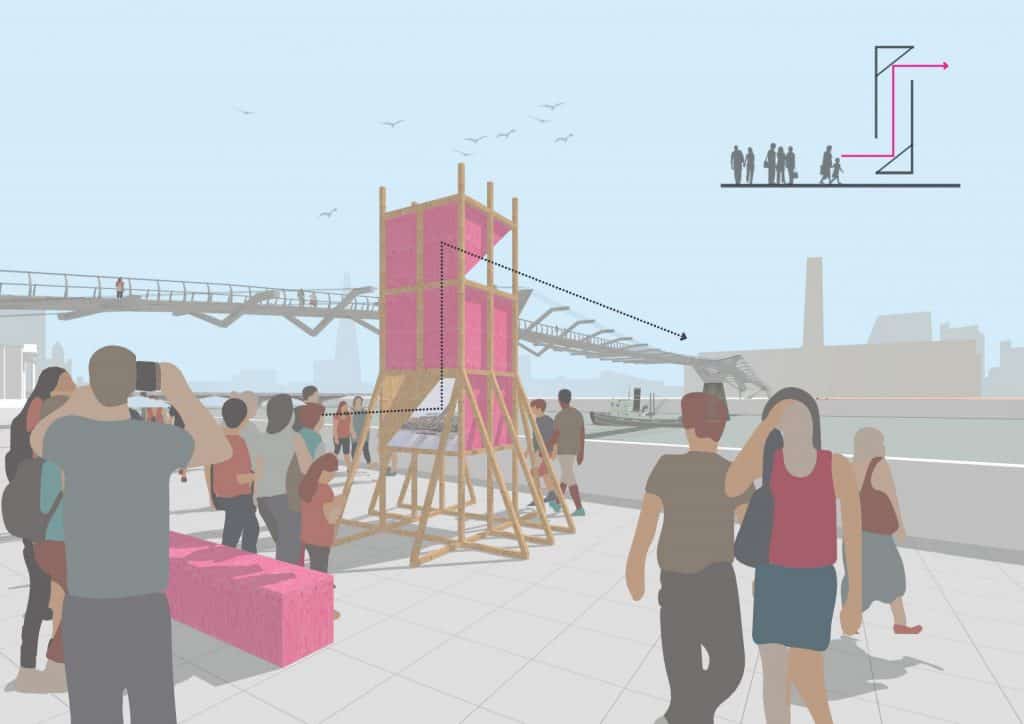 Crossing the River is a series of simple timber framed structures designed to encourage visitors to cross to the North bank and interact with the river in different ways. A periscope acts as a beacon and offers views across the river; a simple open air event space harnesses the river as the backdrop for summer performances; a mudlarking display pavilion showcases the Thames as ‘liquid history’ through archaeology; and a ‘poetry trumpet’ can be used to project stanzas inspired by the Thames across its waters. 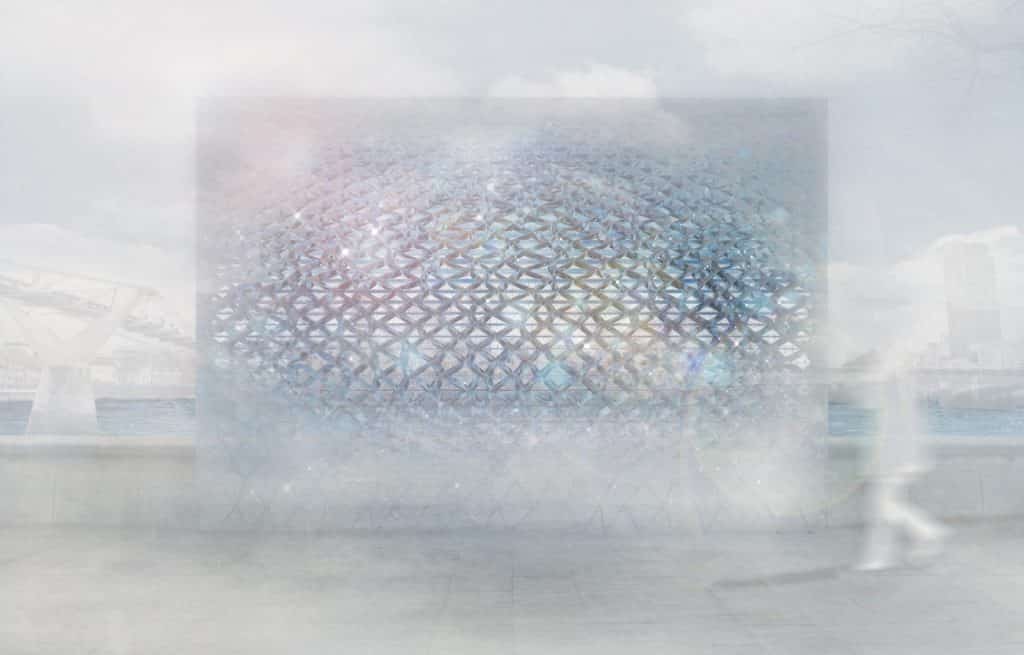 Liminalis an ‘architectural painting’ using a variety of mirror, bright, satin and matt polished aluminium panels to focus and alter viewers’ perception and experience of the river, and blurring the boundaries between 2D, 3D and 4D. The modular design can be shared over four sites, while a combination of a sonar device and a specially-designed app enhances the multi-sensory installation through an ever-changing light field and soundscape that explores the surface and depths of the river.

The winning team will be announced in early 2019.

“Our River View competition has produced a fantastic shortlist, with an array of creative talent applying their imagination to explore the many boundaries embodied by the Thames. Whether those boundaries are water vs. land, north vs. south, nature vs. the city or contemplation vs. crowds, the shortlist demonstrates the many ways in which people can interact with London’s river. I’m looking forward to choosing a winner with my fellow judges, and to bringing that to fruition in time for LFA2019 in June.”

“Six teams and six designs, all of them in the running to create an eye-catching and innovative structure that encourages people to engage with London’s iconic river. Given the location and the huge footfall, it is no surprise that this opportunity was seized upon so enthusiastically. My colleagues and I at Guildhall look forward to seeing the winning design in place next summer.”

“We are keen to see more public realm improvements along the river to make it more attractive, inclusive and accessible for all and encourage more people to walk along the north bank. I hope that the creative ideas generated by this competition will develop into a lasting legacy that will complement the Illuminated River project and its celebration of the Thames and its environs at night.”