A design charrette, organised by the LFA and the Royal Docks Team (RDT) in partnership with Newham Regeneration in 2018 produced a series of proposals designed to inform the development of new connections in the Royal Docks, during the area’s transformation into a world-class commercial and cultural destination through a £314 million regeneration programme led by the Mayor of London, Sadiq Khan, and Mayor of Newham, Rokhsana Fiaz.

The design charrette – launched via an open call in September 2018 that attracted 31 expressions of interest – aimed to examine how the arrival of the Elizabeth Line at Customs House can drive regeneration and improve connections across the Royal Docks – London’s only Enterprise Zone – while integrating existing communities and reflecting the area’s rich social and cultural heritage. 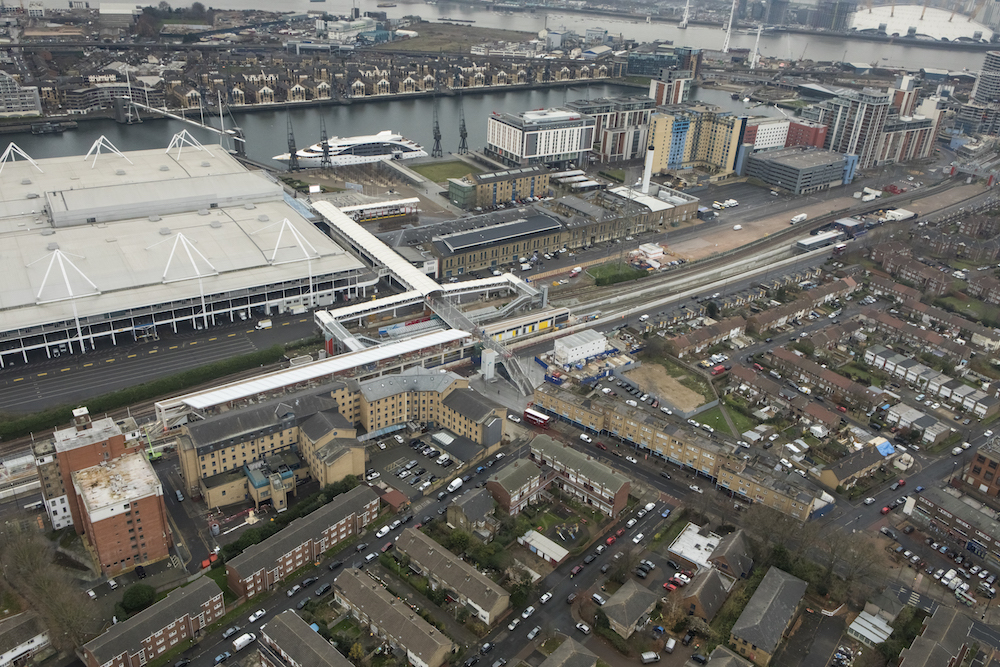 Five shortlisted teams – Ash Sakula, Farrells, The Klassnik Corporation & London School of Architecture (LSA), LYN Atelier & Urban Narrative, and Sarah Wigglesworth Architects with Fluid & Kinnear Landscape Architects – took part in an initial workshop in November 2018 facilitated by Daisy Froud, and attended by key community and other stakeholders including PEACH (The People’s Empowerment Alliance for Customs House), Transport for London, the Royal Docks Team, Newham Council and ExCeL London. Following a site tour and presentations from stakeholders, the teams worked to identify priority issues before beginning to develop proposals, with all participants pooling experience, knowledge and ideas. This was followed by a design review session, with community and stakeholder participants providing feedback, before the design teams were charged with developing resolved proposals for the next stage.

The second public stage – held at ExCeL London on 15 January – saw design teams present worked-up proposals in response to the brief and issues raised at the preceding stage. While the official ‘jury’ retired to consider each scheme, the audience of wider community and local stakeholders were invited to discuss and review the schemes themselves.


Three commendations were awarded by the jury: 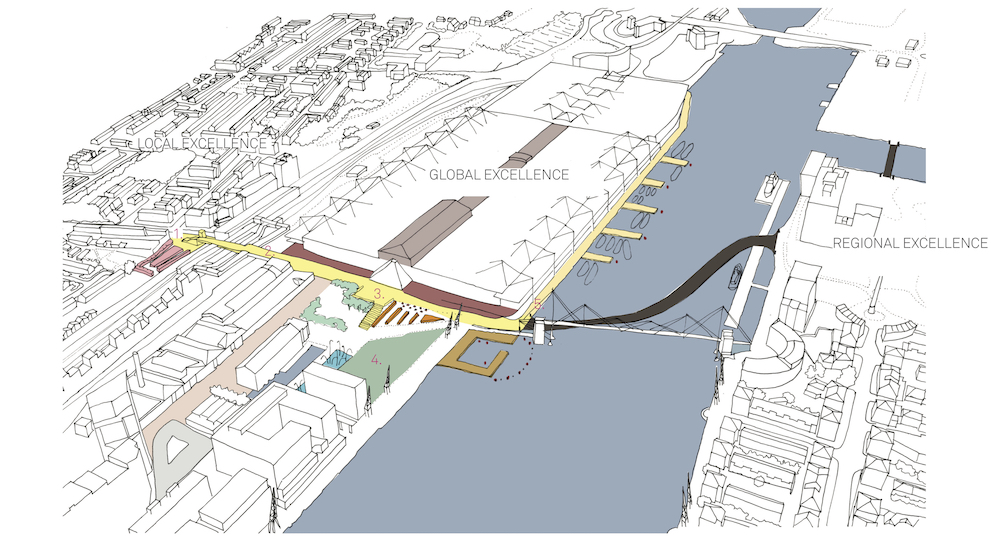 This proposal identified the real potential of ExCeL as an untapped public resource whose existing infrastructure and resources can be harnessed to support new relationships and activities. By enhancing the range of activities within ExCeL, using its central atrium as a social and meeting space, and opening up its waterfront as a space for new community and workspaces, the proposal offers real reasons for people to come over from Custom House. The jury felt LYN Atelier and Urban Narrative’s proposal could best help meet the Mayor of London’s Good Growth Agenda, and described the use of ‘normal, everyday stuff’ as a ‘stroke of genius’ that could also break down barriers and increase the range of uses across the Royal Docks, allowing the neighbourhood to function better at local and international levels. 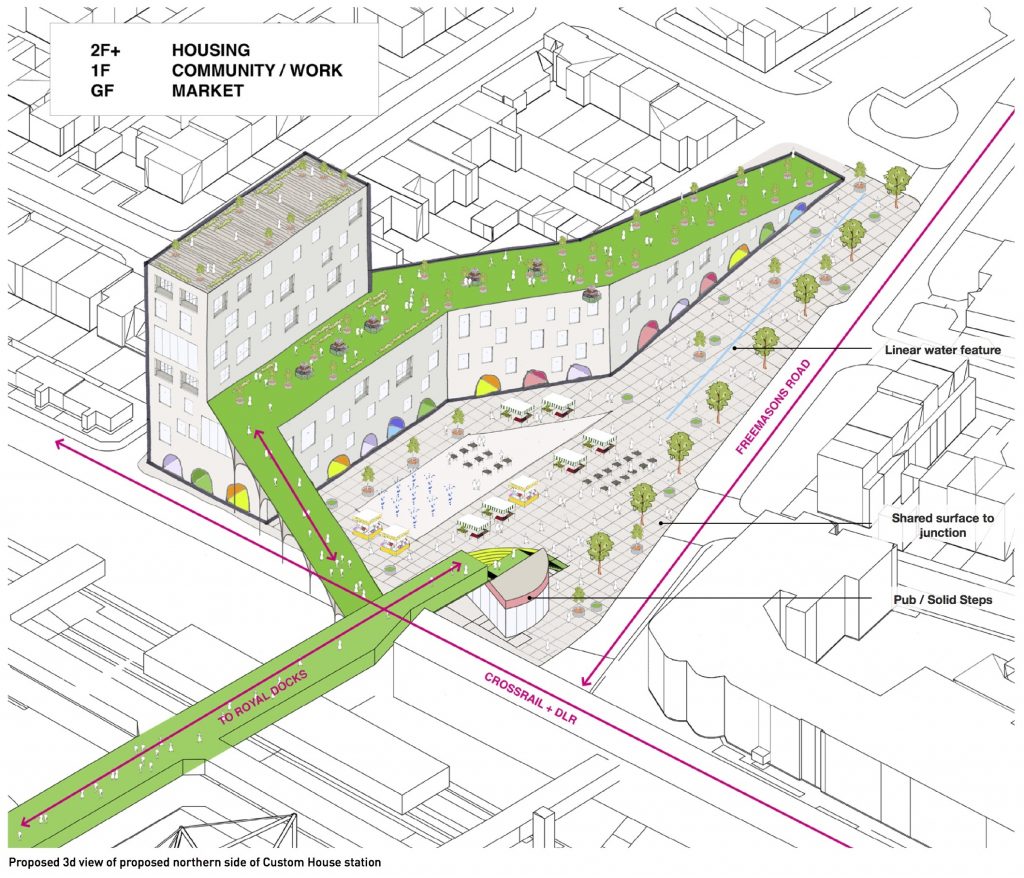 Klassnik Corporation and LSA proposed a new walkway structure – sculpting the roof of an existing shopping parade to create a new level that can link ExCeL, Custom House station and a new public square. The jury awarded their commendation for the proposal they felt could best curate and enhance the experience of arrival, and to ensure transport infrastructure does not further separate communities from access to the docks, businesses and amenities. They recognised the potential of this proposal to break down the barrier between Custom House station and local facilities, thereby opening up useful public space, providing space for new activities and supporting sustainable energy and transport. 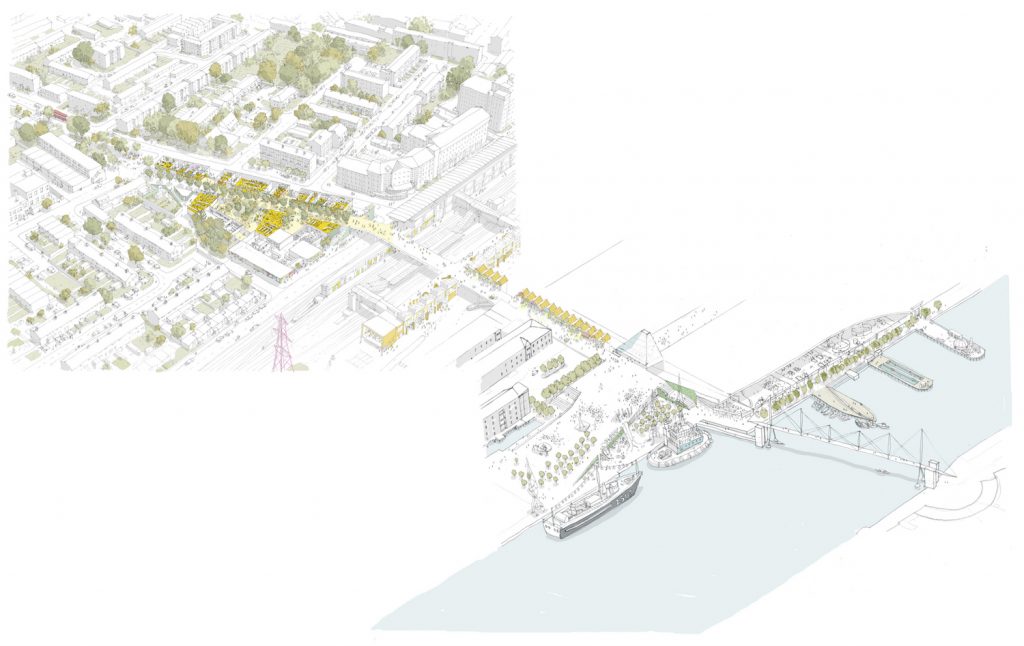 Ash Sakula addressed the physical boundary presented by the railway by extending the Custom House station walkway into Custom House itself, lining it with restaurants, cafes and bars, and opening out into a square that then flows into a sequence of new squares and spaces accommodating a variety of recreational, retail and community uses. This was described by the jury as a ‘delightful’ scheme that connected the two sides of the neighbourhood, in a way that addresses the Mayor of Newham’s agenda of putting the residents at the heart of everything. The jury admired the way Ash Sakula put equal effort and care into both sides of the railway, the use of ExCeL as a meaningful resources, and the use of materials to convey a sense of everyday life.

In addition to a commendation for meaningful engagement, Ash Sakula were the overwhelming winner of the ‘people’s choice’ award based on an audience vote.

See the winning entries here and more details on the process and outcomes here.

A design charrette, organised by the LFA and the Royal Docks Team (RDT) in partnership with Newham Regeneration, has produced…