The interventions were installed at two locations within the City of London’s footprint: one in Bow Churchyard Cheapside and the other on Middlesex Street in Aldgate. The brief was to respond to themes of urban greening, rewilding, sustainability and play and to use the history of the selected sites to create something playful and immersive, while also acting as a space to inhabit in various different ways.

Wayward’s design for the Mobile Arboretums focused on the market history of the two locations – medieval produce and poultry in the case of Cheapside and fabrics from Petticoat Lane in Aldgate – using this as the framework for a new arboreal legacy. The installations emphasised each site’s history as hubs for trade by housing saplings and other young plants in market barrows and carts.

In their attempts to tell the stories of Aldgate and Cheapside, the arboretums were designed to match the geography and usage of each site. The Mobile Arboretum in Cheapside, houses saplings of large deciduous trees, such as oak. This creates a shady forest floor design that connects with the ancient Plane tree in the centre of St-Mary-Le-Bow Churchyard. The Aldgate Mobile Arboretum, however, offers a more Mediterranean experience, with drought-tolerant plants the dominant feature. This connects the planters with the international food markets that define Middlesex Street. Throughout the summer the plants were cared for by the Ambassadors of Cheapside and Aldgate.

As well as highlighting each site’s unique history, Wayward also designed the Mobile Arboretum with one eye on the future. The choice to use saplings in each planter rather than more mature plants symbolises forward movement and hope as the necessity to continue regreening our urban spaces becomes ever more pressing.

Wayward, is a London-based landscape, art and architecture collective of designers, artists and urban growers. Wayward are an organisation who have long prioritised local narratives, centring much of its work around the history of an area as a means of community engagement. In 2010, Wayward were involved in the London Festival of Architecture as they hosted the Union Street Urban Orchard. The project reclaimed derelict land in Bankside, making use of over a hundred volunteers to transform the site into a space for exchange between local residents and visitors.

On top of this, Wayward was also involved in the Algae Meadow, a collaboration between them and Seyi Adelekun for LFA 2021 that explored how biodiversity can be cared for and enhanced in urban environments. 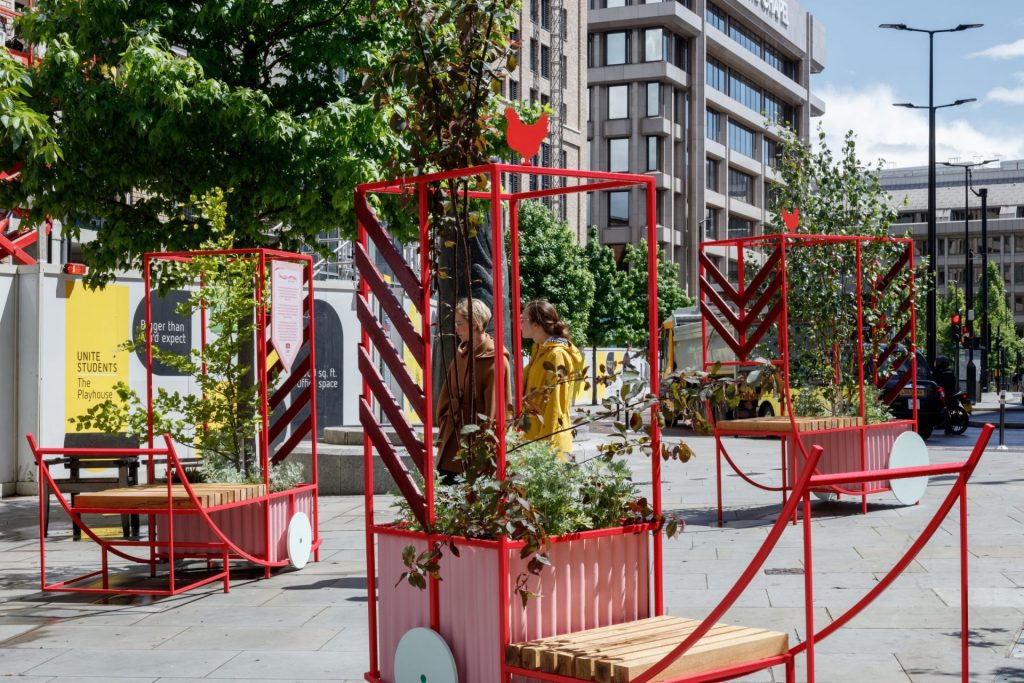